Contaminates remaining in the sediment of the Miramichi River and its estuary are due to its land-use history.  They may pose risks if disturbed.  MREAC's analysis of sediment quality in 1993, 2002, 2005 and 2006 on the Napan Rivers and Upper Miramichi estuary, provide a partial picture of sediment quality.  The upper estuary study (Parker 2006/07) is inconclusive but suggests that sediment quality may be improving.  This could be due to upgrades in industrial process and improvements in municipal infrastructure, principally over the last decade.  The other major factor appears to be the passage of time with reduced toxic inputs.

Information gaps remained on the lower estuary of the Miramichi River.  An updated assessment would be valuable for the benefit of economic and social sectors of our community to provide a basis upon which to make decisions of utilization, development or disturbance within the estuary.  Recent downturns and closures of Miramichi based industries has resulted in reductions of inputs into the Miramichi estuary. 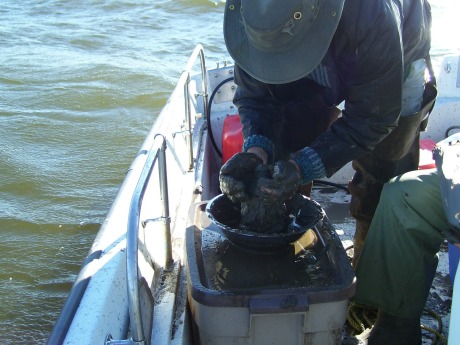 MREAC had opportunity in 2007/08, with funding provided by Science Linkage, to complete a more comprehensive analysis to better compare the different generations of sediment quality to determine the direction and scale of changes over time, and the relative risks inherent in disturbing the contaminants locked up in estuarine sediment.  Ten sediment samples were collected in the lower estuary part of the Miramichi River and compared with the previous work in the upper estuary (1993 & 2002).  A report was completed by Mr. Roy Parker, and some of his conclusions are: